Before diving into the world of Kubernetes, let’s take a look at what Kubernetes was built on – Docker.

Docker is famous for its simplicity and ease of use. That’s what made Docker popular and became the foundation of Kubernetes. A Docker container is stateless and fast. It can be destroyed and recreated without paying much of a price. But it’s hard to live a meaningful life with amnesia. No matter if it’s your database, your key-value store, or just some raw data. Everyone needs persistent storage.

It’s straightforward to create persistent storage in Docker. In the early versions, the user can use -v to create either a new anonymous undetermined sized empty volume or a bind-mount to a directory on the host. During those days, there was no third party interface allowing you to hook into Docker directly, though it could be easily worked around by bind-mounting the directory which had already been mounted by storage vendor on the host. In August 2015, Docker released v1.8, which officially introduced the volume plugin to allow third-parties to hook up their storage solutions. The installed volume plugin would be called by Docker to create/delete/mount/umount/get/list related volumes. And each volume would have a name. That’s it. The framework of the volume plugin remains largely the same till this day.

So, what are they? Which one of the two works like the volume in Docker?

In fact, neither works like the volume in Docker. In addition to PV and PVC, there is also a Volume concept in Kubernetes, but it’s not like the one in Docker. We will talk about it later.

But no, that’s not what PV and PVC are. In Kubernetes, one PV maps to one PVC, and vice versa. It’s one to one mapping exclusively.

I’ve explained those multiple times to people with extensive experience with storage and cloud computing. They almost always scratch their heads after, and cannot make sense of it.

I can’t make sense of it either when I encountered those two concepts for the first time.

Let’s quote the definition of PV and PVC here:

A PersistentVolume (PV) is a piece of storage in the cluster that has been provisioned by an administrator. It is a resource in the cluster just like a node is a cluster resource. PVs are volume plugins like Volumes but have a lifecycle independent of any individual pod that uses the PV. This API object captures the details of the implementation of the storage, be that NFS, iSCSI, or a cloud-provider-specific storage system.

The keywords you need to pay attention to here are by an administrator and by a user.

This is different from the traditional approach, in which the admin is not responsible for allocating every piece of storage. The admin just needs to give the user permission to access a certain storage pool, and decide what’s the quota for the user, then leave the user to carve out the needed pieces of the storage from the storage pool.

But in Kubernetes’s design, PV has already been carved out from the storage pool, waiting to be matched with PVC. The user can only request the pre-allocated, fixed-size pieces of storage. This results in two things:

As a result, it’s hard to enforce the separate of allocation (PV) and usage (PVC). In the real world, I don’t see people using PV and PVC as the way they were designed for. Most likely admins quickly give up the power of creating PV and delegate it to users. Since PV and PVC are still one to one binding, the existence of PVC become unnecessary.

So in my opinion, the use case PV and PVC designed for is “uncommon”, to say the least.

I hope someone with more Kubernetes history background can chip in here, to help me understand why Kubernetes is designed in this way. END_OF_DOCUMENT_TOKEN_TO_BE_REPLACED

What are the options?

To keep things simple, a front-end client could directly communicate with the back-end microservices, shown in Figure 4-2. 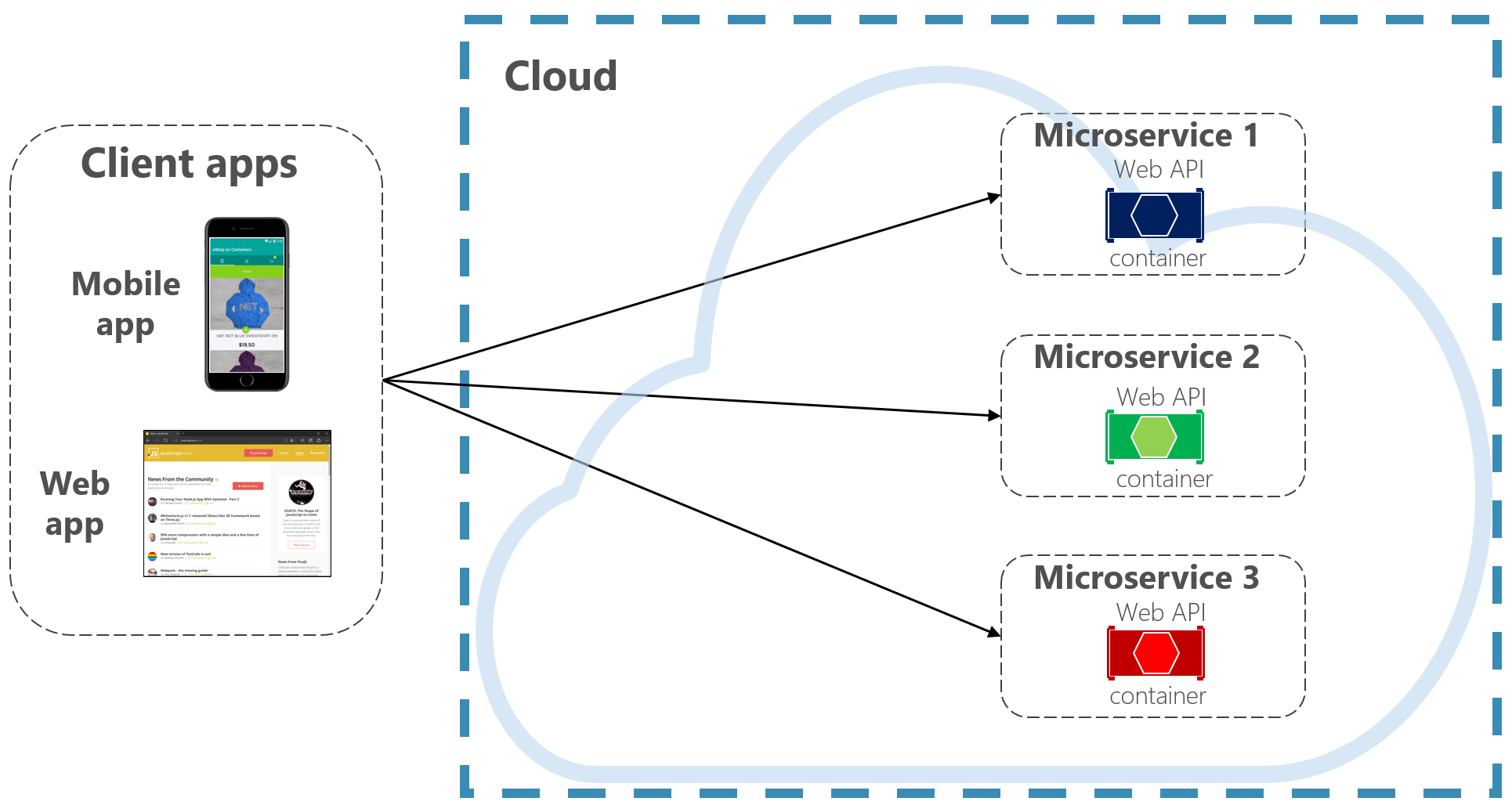 With this approach, each microservice has a public endpoint that is accessible by front-end clients. In a production environment, you’d place a load balancer in front of the microservices, routing traffic proportionately.

While simple to implement, direct client communication would be acceptable only for simple microservice applications. This pattern tightly couples front-end clients to core back-end services, opening the door for a number of problems, including:

Instead, a widely accepted cloud design pattern is to implement an API Gateway Service between the front-end applications and back-end services. The pattern is shown in Figure 4-3. 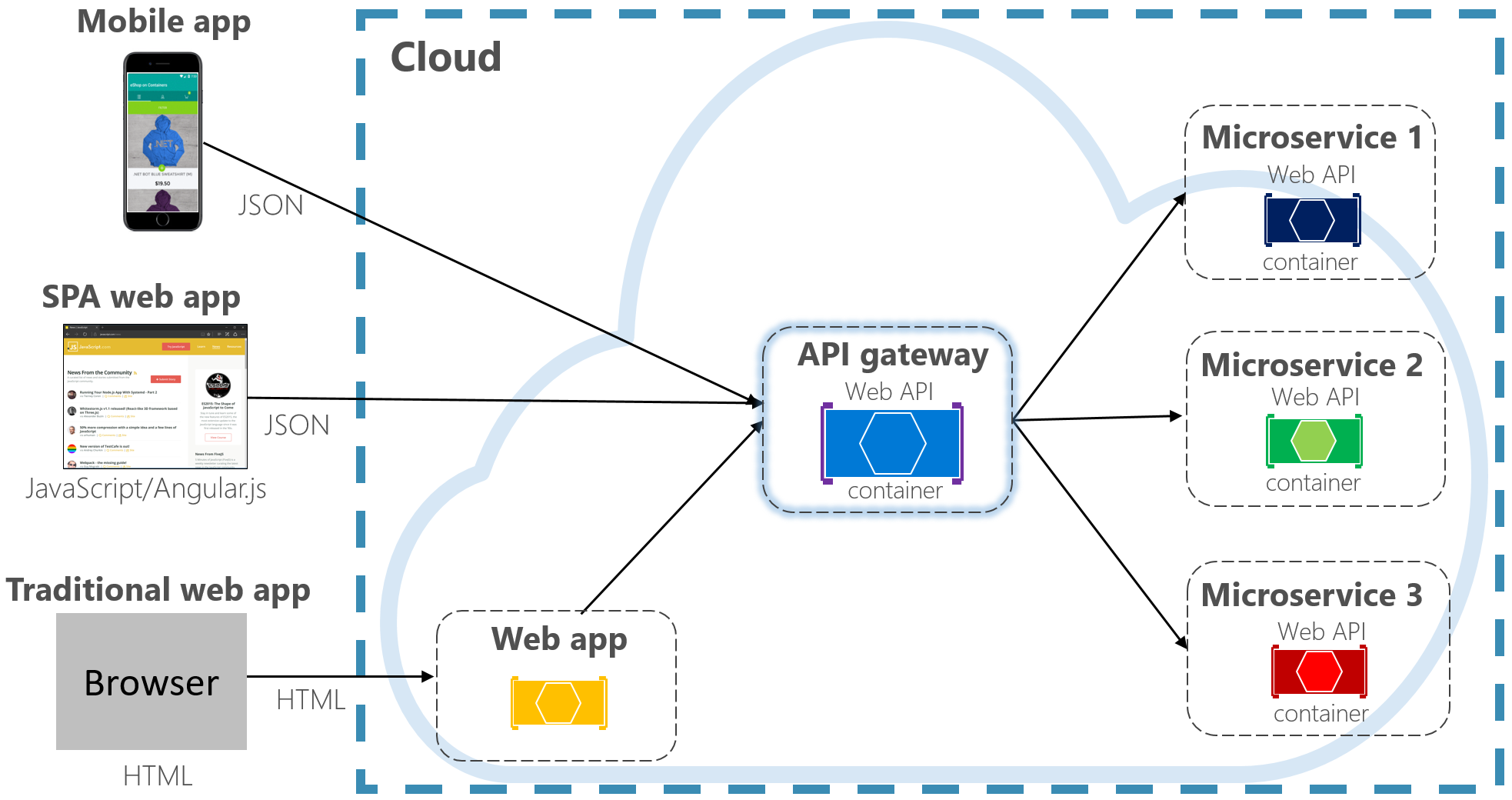