Load data on demand into a cache from a data store. This can improve performance and also helps to maintain consistency between data held in the cache and data in the underlying data store.

Many commercial caching systems provide read-through and write-through/write-behind operations. In these systems, an application retrieves data by referencing the cache. If the data isn’t in the cache, it’s retrieved from the data store and added to the cache. Any modifications to data held in the cache are automatically written back to the data store as well.

For caches that don’t provide this functionality, it’s the responsibility of the applications that use the cache to maintain the data.

An application can emulate the functionality of read-through caching by implementing the cache-aside strategy. This strategy loads data into the cache on demand. The figure illustrates using the Cache-Aside pattern to store data in the cache. 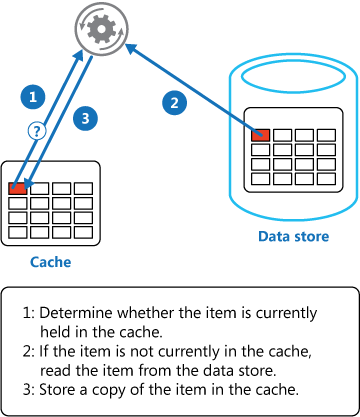 If an application updates information, it can follow the write-through strategy by making the modification to the data store, and by invalidating the corresponding item in the cache.

When the item is next required, using the cache-aside strategy will cause the updated data to be retrieved from the data store and added back into the cache.

Consider the following points when deciding how to implement this pattern:

Lifetime of cached data. Many caches implement an expiration policy that invalidates data and removes it from the cache if it’s not accessed for a specified period. For cache-aside to be effective, ensure that the expiration policy matches the pattern of access for applications that use the data. Don’t make the expiration period too short because this can cause applications to continually retrieve data from the data store and add it to the cache. Similarly, don’t make the expiration period so long that the cached data is likely to become stale. Remember that caching is most effective for relatively static data, or data that is read frequently.

Evicting data. Most caches have a limited size compared to the data store where the data originates, and they’ll evict data if necessary. Most caches adopt a least-recently-used policy for selecting items to evict, but this might be customizable. Configure the global expiration property and other properties of the cache, and the expiration property of each cached item, to ensure that the cache is cost effective. It isn’t always appropriate to apply a global eviction policy to every item in the cache. For example, if a cached item is very expensive to retrieve from the data store, it can be beneficial to keep this item in the cache at the expense of more frequently accessed but less costly items.

Priming the cache. Many solutions prepopulate the cache with the data that an application is likely to need as part of the startup processing. The Cache-Aside pattern can still be useful if some of this data expires or is evicted.

Consistency. Implementing the Cache-Aside pattern doesn’t guarantee consistency between the data store and the cache. An item in the data store can be changed at any time by an external process, and this change might not be reflected in the cache until the next time the item is loaded. In a system that replicates data across data stores, this problem can become serious if synchronization occurs frequently.

Local (in-memory) caching. A cache could be local to an application instance and stored in-memory. Cache-aside can be useful in this environment if an application repeatedly accesses the same data. However, a local cache is private and so different application instances could each have a copy of the same cached data. This data could quickly become inconsistent between caches, so it might be necessary to expire data held in a private cache and refresh it more frequently. In these scenarios, consider investigating the use of a shared or a distributed caching mechanism.

When to use this pattern

Use this pattern when:

In Microsoft Azure you can use Azure Cache for Redis to create a distributed cache that can be shared by multiple instances of an application.

This following code examples use the StackExchange.Redis client, which is a Redis client library written for .NET. To connect to an Azure Cache for Redis instance, call the static ConnectionMultiplexer.Connect method and pass in the connection string. The method returns a ConnectionMultiplexer that represents the connection. One approach to sharing a ConnectionMultiplexer instance in your application is to have a static property that returns a connected instance, similar to the following example. This approach provides a thread-safe way to initialize only a single connected instance.

The GetMyEntityAsync method in the following code example shows an implementation of the Cache-Aside pattern. This method retrieves an object from the cache using the read-through approach.

An object is identified by using an integer ID as the key. The GetMyEntityAsync method tries to retrieve an item with this key from the cache. If a matching item is found, it’s returned. If there’s no match in the cache, the GetMyEntityAsync method retrieves the object from a data store, adds it to the cache, and then returns it. The code that actually reads the data from the data store is not shown here, because it depends on the data store. Note that the cached item is configured to expire to prevent it from becoming stale if it’s updated elsewhere.

The UpdateEntityAsync method shown below demonstrates how to invalidate an object in the cache when the value is changed by the application. The code updates the original data store and then removes the cached item from the cache.